It’s funny how after all these years I can still miss the obvious. I spend a couple of hours on the Usk this afternoon and waste the first ninety minutes fishing where there are no fish. I think ‘fishing where the fish are’ must be one of the golden rules of fishing…. and I break it. 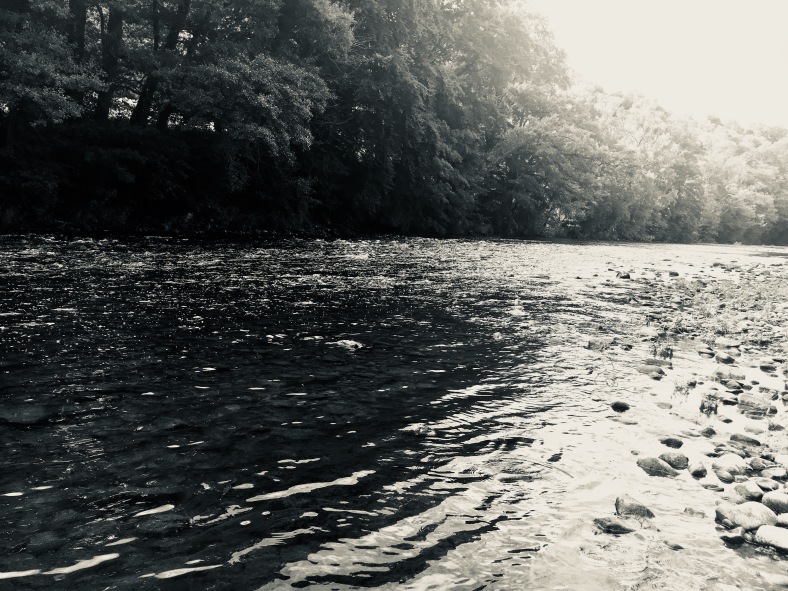 The Usk is a big river and with no discernible hatch, the trout spread out. I aim for a little stretch, a long bubble line where I have caught on several recent visits and with little thought I set up to prospect with a dry. It’s mid afternoon, overcast and with a good chance of a shower. There are no fish rising. After a while I switch to the duo, with the same spectacular lack of success. I’m happy to be out fishing and continue going through the motions.

I assume that because we’ve had some rain and the temperature has dropped I will find trout in the long tails where I have caught them before.

For an hour and a half I see no fish and get no interest on any fly.

I take a break and sit on the bank. Looking down on the river I realise that I’ve got it all wrong. The water temperature is still high and although we’ve had some rain the river is still relatively low. Trout are going to seek out the oxygenated water or lie deep in the cooler pools. I wander upstream to the first stretch of quicker water. I switch tactics to two nymphs, a Jon Barnes black magic on the point and a pheasant tail with a red tag on the dropper. 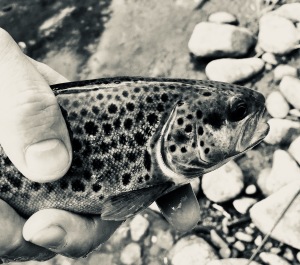 I’ve also switched to the sunray line and I’m targeting the pocket water and food seams as they fan out across the river. Today I only have my Sage SLT with me, a fantastic dry rod but not renowned for tight line nymphing. I make do.

I need to cross the river to get into the best position on the drift and just two casts in, I hook and net my first brownie. In less than twenty minutes I catch three more from the same run. Three are about 12″ with the best at 14″. I should have thought more and started here when I arrived.

The last hook up is the most satisfying, even though the fish throws the fly. I cast over my left shoulder and manage to land the nymphs just to the side of a prominent boulder. As they drift below I lift the flies a little and induce an aggressive take, probably the best fish today, but I can’t control his initial jump and he’s gone.

I head back, as today I can’t stay and fish into the evening and this season most fish have come late in the day.

It’s true that from the start of the year I’ve caught less trout from the Usk per hour fished than any previous season. I’m not the only one to experience this. I also realise that today I’ve had a bit of a lazy session and wasted a lot of time. It’s still fun though. There’s nowhere I’d rather be for two hours on a Saturday afternoon. 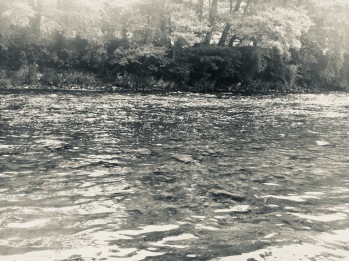 August Afternoon on the Usk

One thought on “A Lesson Learned…..”